update (2009-01-05): a more polished version of this article is published in my new book, Bridging the Communication Gap as part of the “Implementing Agile Acceptance Testing” chapter!

The idea of the example-writing workshop to support acceptance testing seems to cause a lot of confusion and misunderstanding, at least judging from my two most recent talks and the questions during the discussion at the second Alt.NET UK conference. A lot of people seem to somehow contrast that to iterative development and mistake the workshop for big design up-front, expecting that it will increase the feedback loop. To resolve the misunderstanding, here is an example of how the workshop (and acceptance testing) fits into an agile process to shorten the feedback loop and improve iterative development.

Agile acceptance testing, at least in the form in which I use it, does not say anything about how to develop software or organise iterations. There is nothing stopping us from fitting it into a two-week iteration. In fact, it will work best with short iterations. Short iterations enforce us to keep the stories which should be discussed in the workshop short, allowing us to keep the workshop short and focused. This is a simplified version of the iteration flow that Andy Hatoum and I came up with recently. Take this just as a guideline, not as something that has to be implemented exclusively that way. Hopefully it will make it easier to understand how to apply these ideas in different environments.

The brackets point out to the iteration that a step relates to. N is the current one, N-1 is the previous one and N+1 is the next iteration. 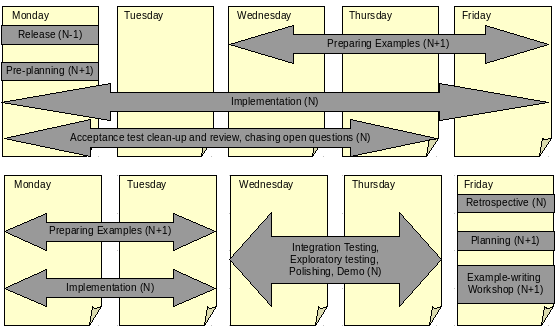 After this, we start all over with the next iteration.