The waterfall trap for “agile” projects

Jeff Patton from Thoughtworks held a very interesting session at XpDay last month in London, focusing on a common misconception that causes “agile” projects to fall into the same trap that the waterfall ones typically do.

Incremental is not iterative

Using a very interesting combination of pop music and rock star images, Jeff Patton told a story of a failed agile project in his XpDay keynote “Embrace Uncertainty”. The project started off nicely, almost by the book, with customer involvement and stories split into iterations, based on what functionality is to be delivered in what release. After they got something delivered to play with, customers changed their minds (as they so often do) and new stories and features were introduced into the plan. After a few deliveries, the scope kept growing and growing instead of reducing. From the developer perspective everything worked as planned – customer was expanding the scope and developers are there to oblige, because that is the essence of agile practices. Spice Girl Mel B was used for the role of a developer writing user stories and losing all sight of the big picture (while “So tell me what you want, what you really really want” was playing in the background). For the customer, the thing simply did not work - iteration after iteration, they were not any closer to having the project done.

The problem was that the concept of iterating had been lost and iterations were replaced by increments – making the project fall into the same trap as waterfall projects do. Iterations were aimed to deliver blocks of functionality. Jeff demonstrated that visually using the Mona Lisa painting (powerpoint slides from the keynote have still not been released, so the pictures below are not the same ones as Jeff used, but they show the point): 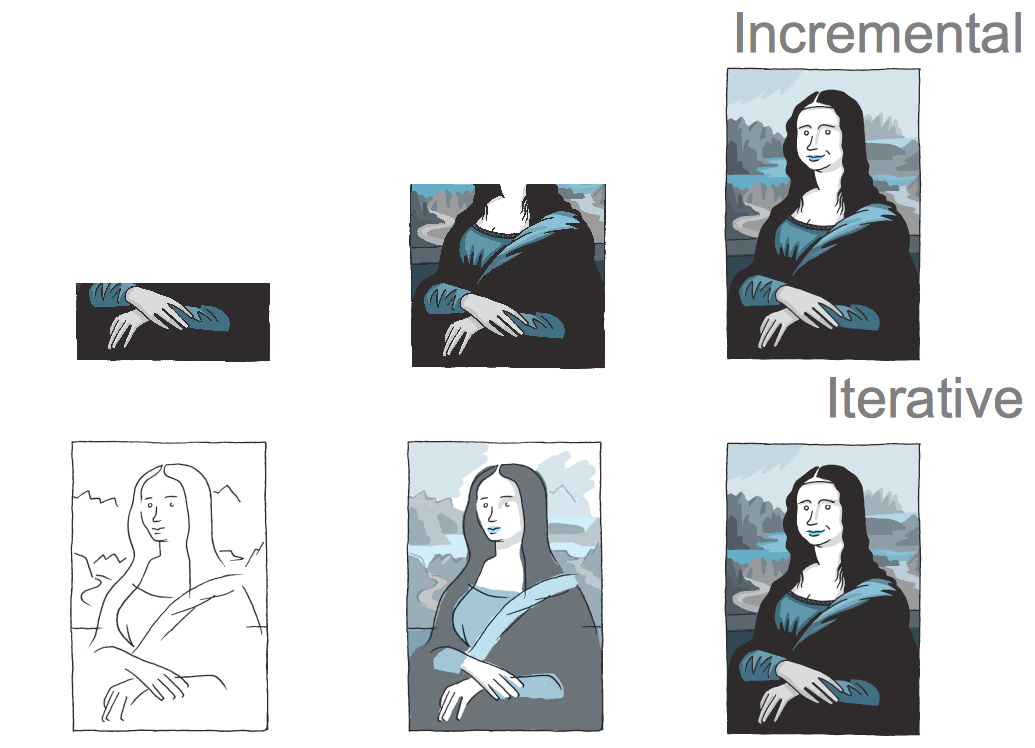 Although both these plans aim for the same thing, the incremental plan does not really reduce the risk of delivering something unsuitable to the client. The big picture appears only at the very end. Because increments are done in detail, a lot of effort is wasted when a piece needs rework (and the initial releases are almost certain to fall into this category). Iterative development offers a chance to see the picture from the start, and guide the development towards the full picture in steps. Not carving stuff in stone from the start allows us to change them easier later on, and we know that we’ll need to do that. Jeff gave the following rule of thumb to check quickly if your plan is iterative or incremental: “it’s not iterating if you do it only once”.

However, iterative planning is harder to sell. Stakeholders want the project delivered by a fixed date on a fixed budget, and an uncertain iterative plan does not help with that. The XpDay keynote also offered three strategies for dealing with that: